When you think, or at least I think, “Things to do at Disney World”, two things come to mind.  Rides and food.  This post isn’t about food.

The idea for this post was supposed to be easy: Rate your top 10 attractions at Walt Disney World. This includes rides, shows, fireworks, heck you can even include transportation.  Seems simple yes? Anyone who’s been to Disney can rattle off the top few rides, and then more, then… and then you no longer have 10. How do you narrow it down?

Have you asked me this question 5 years ago and this list would be different.  Experiencing the parks with a kid starts to change your appreciation of things.  You experience rides you may not have, or seen others in a new light.

Let’s get the long-list out of the way first. There are a few that just didn’t quite make it in, but were on the long list.  This includes the TTA, Toy Story, Big Thunder Railroad, Rock’n Rollercoaster, Tower of Terror, and Kali River Rapids.  Some should be on this list but due to recent changes, aren’t – I’m looking at you Spaceship Earth.

Now for the actual list.  This is not “in order” but by park.  Was hard enough to narrow it down in order.  Although Pirates are #1!  If you disagree, agree or want to chime in with your own top 10, enter your own thoughts down below in the comments.

Pirates of the Caribbean 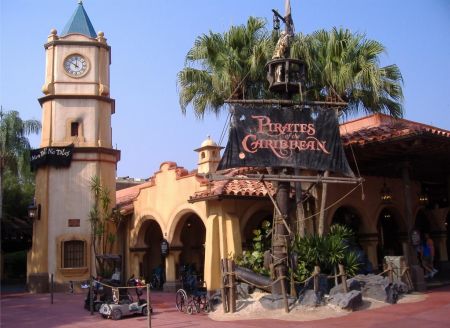 Reason: This is the immediate thing I thought of when making this list. Pirates is one of those rides I always try to figure out how I can ride first when I get to the parks. The enjoyment of the ride starts well before I get on it.  The que has two very detailed lines, with tons of stuff to look at and geek out about.  Then the smells, the sights, the animatronics… All remind me of why I love this ride.  And it probably helps that this is my dad’s favorite ride, so we rode it quite often when I visited Disney as a kid.  And hopefully this will be high on Callista’s list when she’s older too. 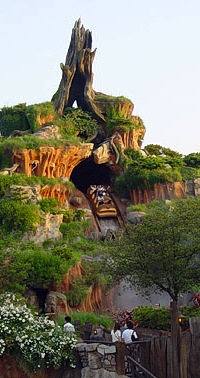 Reason: Speaking of Callista, I actually think this is her favorite ride.  On our last trip we got down quite late, but the Magic Kingdom was open to 3am.  Even though it was after midnight, Callista was determined to ride this ride for the first time. And second… Ad I think the final count was 5 back to back.

The que isn’t something I experience much now that there is fast pass, but I remember being fascinated with all the invisible talking animals in the treetops and bird houses.  It made the long hour wait quite bare able to my young mind.  Always something to listen for. Although half of the que is outside, it’s well shaded and relaxing.  One inside, the idea that your walking into a cavern and built-in houses is quite nice.

The ride itself is also enjoyable. The numerous dips and dives is a great way to break up all the stuff to watch.  I enjoy trying to tilt the boat to try to catch up to the boat ahead of us.  Even managed to accomplish it a few times.  Then there’s the final long drop at the end.  Love free falls.

No wonder Callista wanted to ride it so much… Although apparently the vultures toward the end are “bad birds”. 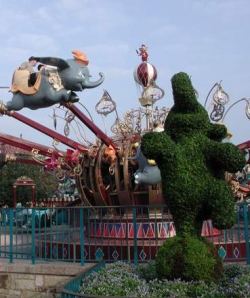 Reason: Where Splash Mountain probably would have been on my list without Callista, these wouldn’t have.  Now it’s kinda a cheat to include two, but they are the same ride for all purposes.  Well at least until the new fantasyland open.

So why is this on the list.  It doesn’t have a que really, and almost no theming.  So why does it take a top 10 spot.  Dumbo is definitely a historical attraction being around for years, but the reason it’s here is Callista.  The sheer joy she has flying the car up and down, tilting it back and forth, and on Aladdin trying to get her dad wet with the spitting camel is priceless.  I now always try to go on this at least once a trip now with Callista, although the short line with Aladdin makes it fairly simple.  And then can get a Dole Whip right after.  What’s better? 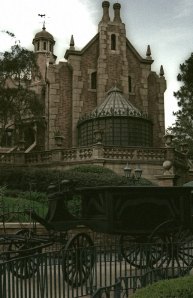 Reason: This almost didn’t make the top 10 and joined the short list.  I’ve always enjoyed the ride, love looking at the old school effects, looking at all the hidden little jokes, and can recite the spell almost verbatim.  I even gotten to enjoy the back door entrance which brings you though a themed hallway that looks like it is the servants quarter area.  Very cool, but not quite enough to compete with some of the other ride.

But then I remembered all the pluses that Disney has added to this ride recently.  The que now is fully interactive, with working ghosts and musical walls. The graveyards been upgraded and more working objects, not just tombstones.  If you want to get right to the ride they even set it up so you can skip the interaction at times it’s not too busy.

Once inside the ride is as most of you remember it.  You get in a doom buggy and ride thought a narrated ride filled with ghosts and ghouls. For the very young it might be a bit much, but in the grand scheme most kids will be able to handle it.  The ending though is the other thing that’s been enhanced.  Instead of a the same animatronics, there are now moving interacting ghosts that do a number of different things.  Very cool. 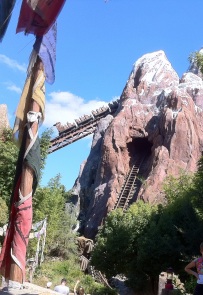 Reason: Although I like Animal Kingdom, it just never had too much draw for me.  I’d do Kali River, the safari, maybe dinosaur, and that was about it.  And if I didn’t get to get to Animal Kingdom in a trip, no big deal.

With the inclusion of the Mount Everest roller coaster, I however have changed my mind on Animal Kingdom.  Now I always make an attempt to see this fast ride.  Fast, complex rides in Disney aren’t very typical, so this one stands out.  The ride changes direction a few times, going forwards and backwards.  Plunging into darkness, and swirling around the ice-cold caverns.  Plus, back when the yeti wasn’t stuck in the 70s, it was amazing to see this huge things swiping at you as you flew by (yes, I saw the working non-disco yeti).  Add to that an amazing line that makes me kinda sad to use the fast pass, and you have an amazing ride.

Festival of the Lion King 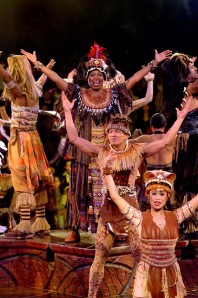 Reason: This is another one of those little items that I doubt I would have ever seen had it not been for Callista.  Now I love it (granted it helps that Lion king is in my top few animated movie list…).  Pocketed away over in Camp Minnie-Micky, this musical show has acrobatics, giant animals, live singing (or so I’m guessing?), “flying” people, and fire twirling.  I like fire…  Anyway, for those that have never seen this show, take some time out and head over to the camp and give it a try.  It’s very entertaining for all ages in your group. 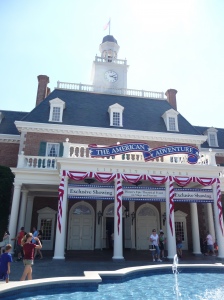 Reason: The American Adventure is one of the few shows that as a kid I wanted to watch.  As a kid I loved history and learning… Probably why EPCOT ranked much higher on my mental scale than most other kids.  As such this show had tons of stuff for me.  History presented in a very immersive way, songs, animatronics… even the little nuisances like the screen getting bigger over time, just played with my imagination.

Speaking of the songs… they just tugged at my little heart-strings.  I still get chills anytime I hear “Golden Dream”, and tear up a little when I hear “Two Brothers”.  I hope to instill the same awe and wonder and appreciation of this show with Callista.   Definitely a don’t miss for me. 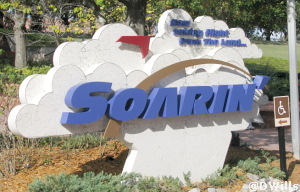 Reason: This one is fairly straight forward.  Gives me the feeling of flight… without all the fear of falling almost endlessly to my death.  Plus the added enjoyment of so many different scenarios, complete with wind and smells, probably helps too.

Living with the Land 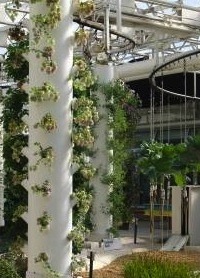 Reason: Much like American Adventure, I’ve loved this ride since I was a kid way more than most kids probably do.  The tinkering and set up of the gardens, water, tech, not to mention the whole “educational” part before you get to the greenhouse… made my little mind fly.

Even today, I still trying to figure out how to make my own greenhouse, with automated watering and sprinkling set ups.  I would love to have even a 10th of this setup in my backyard.  But one can dream and try to figure out how to set it up.  If you have even a slight green thumb, this is not an attraction to miss.  Each time I go, I pick up even more things to integrate into my “perfect” garden.  Oh the things I could do with this sort of set up…

Oh and mark this into the category of desperately wanting Callista to just adore. 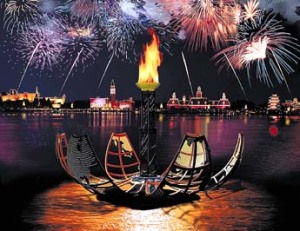 Reason: No Top 10 list of things to do/see in Disney could be complete without Illuminations.  The other fireworks shows and nighttime spectaculars are all fine, but the whole story presented in the World Showcase lagoon is simply amazing.  I get chills when I see the lights dim and all the touches light up and I hear: “We hope you enjoy our story tonight; Reflections of Earth.” Then the disembodied voice blows out the torches around the lagoon to start a show of fireworks, and water, and lasers, and of course the Huge LED screen globe.

Of course the ending is just as chilling to me.  Slowly all the torches come on one by one as the “We Go On” song is sung.  Even got to see this once last year during the 3D desert discover (Food & Wine special event) and got neat Micky Mouse kaleidoscope glasses that made every firework and bright light look like Mickey Mouse ears.  Amazing.

No trip is complete without seeing this at least once.

Have your own favorites that I missed?  Love the ones I chose?  Leave a comment below for everyone to read.