Hidden Audio in the Disney Parks 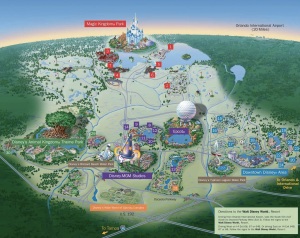 Hiding in plain sight around the Walt Disney Parks is little nuggets of audio.  I remember being a kid and being in line and straining my ears while in a que for a line to make out what all was being said, or music was being played.  These are all things that require little to no physical movement to convey a message and relies on sound alone to add to the feel of the park.  That’s something that puts the Disney Parks above your typical theme park; the attention to detail that most of your guest will never notice.  But I noticed, and I want to share my favorite little hidden audio gems with you.

This trash can seem like any other (although you might notice the electric cord towards the bottom if you’re very observant).  However once you throw something away the audio is triggered.  You will get any number of phrases; ranging from “It’s mine! It’s mine! NO! IT’S MINE!” for a chorus of… er ‘people’ to commenting on what garbage might taste like.  It’s located right next to the fixings bar to the left of the ordering area (across from the soda fountain).  This is one of those things that we stumbled upon and ever since go out of our way to “throw” something away, even if we don’t eat anything here.

There is actually three of these, although to see these you need to have them working (a lot of times… they aren’t).  One is near the Mouse Works shop, another is behind Innoventions West near the restroom, and the last one is near the play fountain between Future World and World Showcase. They all have similar sayings that  refer to being stuck in the pipes or commenting on you wasting water.  Similar to the trash can, the fun here is seeing people who aren’t expecting it, or showing it off to those that don’t know this little gem is there.

Back when there was no FastPass, you used to have to wait for hours in line for Splash Mountain.  Overtime I noticed that all the little houses weren’t just ornamental.  From within them they had little speakers that made sounds of talking squirrels, birds, and other small animals.  Arguing, talking about the weather and all sort of conversations could be overheard if you listened closely enough.  Unfortunately most people miss this entirely as they take the FastPass option, but if you get the chance, stop for a moment and listen into the critter folk and their conversations. 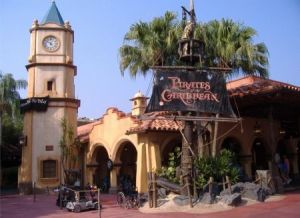 Treasure Hunter in Cave
Pirates of the Caribbean
Magic Kingdom

If you take the right path in the queue for Pirates you will end up near a little cave at the end, right before you get onto the boats.  If you listen closely you can hear shoveling, digging and mumbling from the cave.  It is the sounds of a pirate treasure hunter looking for buried gold. It adds a nice extra level for those that listen and pay attention, but too often people rush past to get on the ride.

Hidden in plain sight in the Magic Kingdom is a phone.  And since it’s located in Main street on the wall, in order to fit in with all the other old-time items, it’s a party line phone.  Now for those that are too young to remember what a rotary phone, a party line phone how all phone originally worked.  You would pick up the phone to make a call and might find someone already using it.  See, most houses shared a single line, and as such you had to wait your turn in order to use it.  This also gave the oddity that you could pick it up and listen into anyone’s conversations.  This phone is no different, except that someone is always on the line.  Take a listen and hear the residents of main street talking to each other.

This is another interesting insight into the “fake background life” of the Disney Parks.  Many people (even cast members when we mention it) don’t notice that there is a little bit of hidden audio at the entrance to Tusker House.  High above you can hear the “inner workings” of the Tusker House kitchen.  People doing dishes, rushing around, cooking food.  Most people rush by to start enjoying their dinner, but next time you have a reservation make sure to stop and take a listen.

This one pretty much dares you to break the rules.  Well kinda.  You see there is this well in Hollywood Studios near the entrance to the Indiana Jones Stunt Spectacular.  It has a sign that reads “ Pull Rope!” For those brave enough to pull the rope they will be greeted with the sounds of someone down the well yelling at you for pulling it.  It’s priceless to see the other people in line trying to decide to stop you (since breaking the rules at Disney isn’t something that people tend to do), and then when they hear the results are quick to want to pull the rope themselves.  So next time your near the show, make sure to stop and pull the rope!

This is a very, very long and omnipresent sound that a lot to people don’t pay any attention to and just assume it’s background noise.  While waiting int he queue for the Jungle Cruise they will constantly interrupt the jungle music playing with announcements. They are all hilarious and sometimes even a bit foreboding for those about to go on the boat trip.  Next time you are in line, stop for a moment and actually try to listen to all the different announcements of lost persons, boats, and even references to the poor team that later you find up a pole running from a rhino & the downed plane that’s been missing.

This also falls in the same category that it really is a background audio, but fun none the less.  While standing under areas of the TTA (or whatever they are calling it this year) you can hear the announcements loops from the TTA.  It used to be much more enjoyable in the past, as it’s been toned down a  bit, but you can still hear calls for Mr Tom Morrow and about keeping your tentacles in the car.  In the past you also heard traffic reports and other futuristic announcements.

Do you have your own little hidden audio tips for people in the parks?  Post them below so people will be sure not to miss them next time.