Which iPad is for me?

Apple’s new iPad is out this friday, and many people are asking “Which one should I get?”    I know I’ve been asked that more than a few times already just since last Tuesday.  The questions is actually rather straight forward.  You just have to ask yourself a few questions.

You might think that it’s just one question: “What am I going to use it for?” and that’s is indeed part of it.  But there’s more nuance to this question and the iPad that you might think.  If you have decided that you want an iPad, you need to decide both why you want one and how you will use it.

This post is a bit long, but probably doesn’t hurt to ask yourself some questions before spending $399-$829+ dollars on a device.  But for the impatient, a decision flow chart on deciding what size and generation iPad is on the left, and if you should get Wi-Fi only model on the right.  It might oversimplify the process a bit, but should help.

“Is this going to be an eBook only reading device?”

I’ll get this one out of the way right off the bat.  If the answer to this question is yes, then you can stop reading this post after this paragraph.  You don’t want a iPad.  Yes I know I’m a Apple fanboy, but if your sole purpose of getting a mobile tablet is to read books, this isn’t the device for you.  You want a Kindle, which goes from $79-$379.  Any of the e-ink screens will work.  The reason is e-ink will give you a better reading experience more similar to an actual book and has a battery that last a ridiculous long time.  The cheaper ones are a 6″ screen about the size of a paperback and very light (great for long reading sessions), and if you want a larger size it’s available up to the same 9.7 inch screen.

Now if you’re answer is “no” or “well not just ebooks,” then read on.  The Kindle doesn’t handle other media very well if at all, and the Kindle Fire which can, doesn’t have an e-ink screen so looses most of the benefit of having the screen.  If you start asking questions about the new e-Texbooks… well that’s iPad only so the Kindle is out for that too.  There are also plenty of other “iPad competitors” out there, but for me the only one that makes sense is the e-ink Kindles, and even then only for the above reason.

“Do you have WiFi in your home?”

This might seem like an odd question.  But with more and more people using the iPad as their only computing device, or in some cases their first computing device, many users won’t have WiFi at home.  The iPad is pretty much useless without some sort of internet connection.  Mail, surfing the web, even getting content onto it originally typically requires some sort of internet connection.

Luckily even if you don’t have internet at home, you have options:

“Do you want to go online while away from home?” 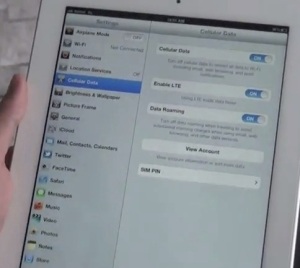 So we’ve cleared up  if you “need” one of the cellular models.  But what about if you want one?  If you are the type of person that wants to check their email or surf online while on the road, you’ll probably want to get one of the cell versions.  Want to access files that aren’t cached when you war at home via DropBox or something in the iCloud?  Again you are going to want to get something beyond just Wifi.  Streaming movies online via Netflix or SlingBox?  Yup you guessed it.  Yes, it cost more up front, but the ability to turn on and off your data plans is nice, and avoids you having to try to find some hotspot to connect to.

All you need to decide is which carrier to use.  If either AT&T or Verizon don’t have good coverage in your area, or where you will be using this, then it’s a simple answer.  If you have both, perhaps one has better “4G” coverage.  If so I’d go with that one.  If they are pretty much the same, then you might want to stay with whatever your cellphone uses (for simplify of billing) or perhaps choose the opposite to insure you’ll always have some coverage if one network fails.  And then there’s always you older iPad cell users that have grandfathered unlimited plans.  If you’re lucky enough to have one… definitely stick with it.

“Do you have/consume a lot of media?”
Are you the type of person that has a huge Music, Movie, or Picture library that you want to bring with you?

“Do you plan on taking a lot of pictures or movies with the iPad?”

“Do you need a retina screen?”
Let’s assume, that you’re looking at getting either a iPad 2 or the entry level iPad (new).  No 4G in your area so that’s irrelevant.  Is the retina screen something worth spending the extra $100 on?

“How much are you thinking of spending?”

The lowest prices iPad you can buy new is $399.  That will get you a 16GB iPad2.  The new iPad goes for $499 for 16GB, $599 for 32GB, and $699 for 64GB.  Adding the cell and GPS options (either 3G or 4G models) adds another $130 on top of that.  And that doesn’t include whatever your monthly data plan is.  You can find sometimes refurbished version on the Apple Website, and they are as good as new, so that’s a way to save some money.  Try to avoid third party sellers selling used iPads, as they likely don’t come with any warranty.  Speaking of warranty you can also buy AppleCare+ for iPad.  This coverage to two years from the original purchase date and adds up to two incidents of accidental damage coverage (just a $50 service fee for replacement for physical damage).  Something to think of since AppleCare+ must be bought within 30 days of your iPad purchase.  AppleCare+ costs $99.

I know that is a lot to take in.  So I decided to make some decision flow charts to help out.  Any other questions?  Leave them in the comments below. 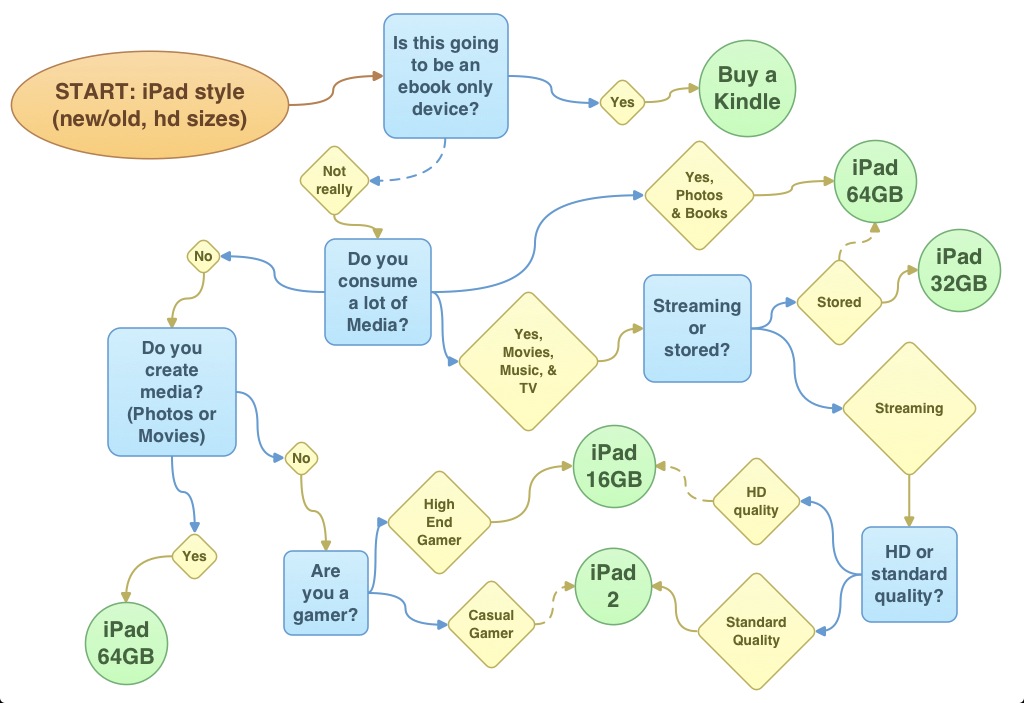