Apple is known to have a very horizontal market when it come to electronics.  Desktops and laptops in the tabletop and full power computing lines.  Little personal travel devices being filled in by iPhones and iPods.  Heck they even took a floundering PC tablet market and redefined it and made it their own with the iPad.  But Apple is hardly one to sit on their laurels.  And there’s a rumor brewing.  It’s been around in many forms for a while.  Apple’s Make a TV?

Of course apple did.  Kinda.  They released a device called it a hobby.  I’m talking about the AppleTV.  But this rumor that is being talked about in the tech circles isn’t that.  The AppleTV is but a toy with it only having sold 3 million in its lifetime, which compared to 3 million iPads a month, isn’t that impressive a number.  That can’t be the amazing Apple TV that is coming out.  They’re dreaming of Apple releasing a full-blown Apple TV, in all it’s 50+ inch glory.  Something that will wow us and trigger our geek envy. I argue we’ve already seen the baseline for this device, and it’s not what many of the tech pundits are thinking.  But then I think I’m getting ahead of myself. 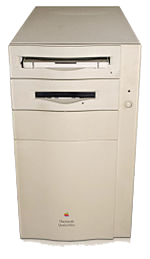 OK everyone, let’s get in the way back machine to the early 90s.  Many people forget that Apple has been a part of the TV age for a long time.  This was back before Jobs came in, way back in 1993.  Some of you might remember the Quadra 840av.  My grandfather had one and I thought it was fascinating.  It shipped from Apple specced out with a TV tuner card already built-in.  Although there have been companies since that have built cards, and external dongles to allow TV on your mac, Apple never got around to releasing another machine with a TV tuner built-in.  Perhaps due to the popularity of the slimmer Performa models, or the price tag of $4,700, that these lines never really took off.  Either way it was Apple’s first foray into the TV market.

The reintroduction to apple to the TV market would come again for another decade.  In 2005 Apple introduced TV shows to its iTunes store.  The content was slim at first and in SD (HD wouldn’t come to the store till 2009), but slowly it started to hold its own and became a fair share of the store, along with music, movies, and podcasts.

At the same time they released a new iPod that supported video content.  This allowed these videos to travel with you wherever you go.  However the screen was small, talking 2.5″ (320×240), so this was more a fad than anything actually useful for long periods of time. It did however have an optional TV output to allow TV shows to be watched on the big screen, but this interface was clunky and didn’t have much in terms of quality.  The low size and quality was great for a small screen, but didn’t scale well for the big screens.  But from this point forward, Apple’s interaction with TV get’s a much needed speed boost. 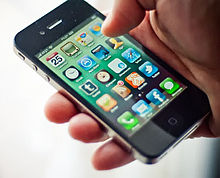 Within 2 years, Apple was in full swing and came out with 2 new devices.  In 2007 we first saw the iPhone with its horizontal display.  Among the “revolution” change in phones, it also drastically changed how we consumed TV and video.  This larger screen at 3.5″ (320×480) made watching movies and TV shows much more enjoyable and the additional hard drive space allowed for even higher qualities that could be streamed out to a TV via a cable.  TV shows could be seen on the big screen and enjoyed and Apple had successfully put TV in your pocket.  Later that year they released the iPod Touch with similar specs. Although within a few years they would have bumped up the resolution, the actual size of the screen hasn’t changed, so the viewing experience for most, don’t change much.

Also released in 2007, although announced earlier, a little hobby.  Apple seemed to have something in mind, but they weren’t ready to full commit to whatever this upcoming idea was.  In June 2006, Apple announced the iTV.  It allowed for content to be streamed from a computer to the device and watched on the TV.  Basically, it had all the features that an iPod or iPhone could do with a cable in terms of video, pictures, and music, but put into a box that was designated to be hooked up to a TV 24/7.  It was as if Apple was testing the features they have put into these devices and trying to figure out a way to make them work on their own.  Apple however knew this was a bit odd gamble, as consumers already had this feature in their devices, so they labeled it a “hobby” and nothing more. Within a year they released a software update that allowed for local storage as well, but still labeled this as a hobby. 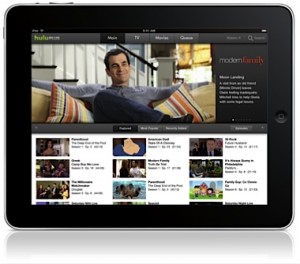 Another 2 years later in 2009, Apple released the iPad.  With a much larger 10″ screen it made watching video even easier and enjoyable.  This was also the year that they released TV in HD available from the iTunes store.  At this point people could easily watch they’re videos in a “TV-Light” experience.  For those that read the blog, I myself use my iPad as a TV already with the use of SlingBox.  And it wasn’t just Slingbox that took hold of this new larger screen.  It because more attractive to other TV content companies with apps like Hulu, Netflix starting to take over.  Even the TV channels themselves started creating apps and making their sites compatible with the iPad (ABC, Discovery, PBS, CNN just to name a few).  All designed to work with this new portable screen.  The iPad unlike it’s smaller super portable, but rather small, iPod touch/iPhone brethren could start replacing smaller TV’s in the house.

At the end of the following year, sept 2010, they completely redesigned the AppleTV.  No longer did it have local storage, the AppleTV was a pure streaming box.  Any iOS or iTunes box you had in the house can stream through it to your TV. It even had the ability to d so from the internet.  TV shows could be bought or rented form the iTunes store.  You could stream your Netflix content directly though it.  Even some live and recorded sports like the MLB & NBA could be used  on it without the use of a computer.  They also put a HDMI port, so you could stream out higher quality content to your HD screens.  Biggest of all they dropped the price to the magic “under $100” mark – $99.

And yet it’s still a hobby.  What is Apple still testing out?  What features and functions is missing from making this a true “4th market” of Apple’s?  Is this just set up for a full-blown TV set like many tech reports are guessing?  Or are they over looking something quite small?

Wow… Seems there was more Apple TV history than I thought.  I really expected to just write a short history blurb and get onto the future, but I guess that will have to wait. Will  post what I think will happen based on current rumors with the future of Apple TV, the 4th market, in the next blog…