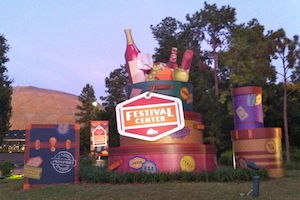 Yup, it’s that time of the year again.  The Epcot International Food and Wine Festival is now in it’s 16th year, of which I’ve been lucky enough to have attended 6 of them.  Besides a number of paid events, the event has 30 separate booths set up all around World Showcase, all featuring food and drink from each area of the different countries. 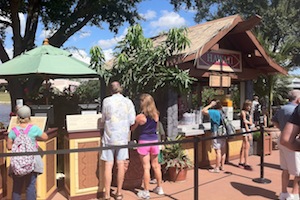 Food items range from as little as $1.50 all the way up to $12.75, and range from small dishes to a decent size appetizer servings. Don’t let the size of the dishes fool you, it’s very easy to get very full fast if you try to fit it all into one day. This year I ate at 16 of the pavilions.  Having been there previously I knew that there were some favorites I wanted to try again (and again, and again in some cases…) and a few new booths from this year to check out.

Today I’m going to share with you what I tried at the Cheese, Caribbean Islands, Hawaii, Scandinavia, and Belgium Booths.  For full menu items (as well as many more pictures) check out the Disney Food Blog’s 2011 Epcot Food and Wine Festival Marketplace Booths and Menus page. 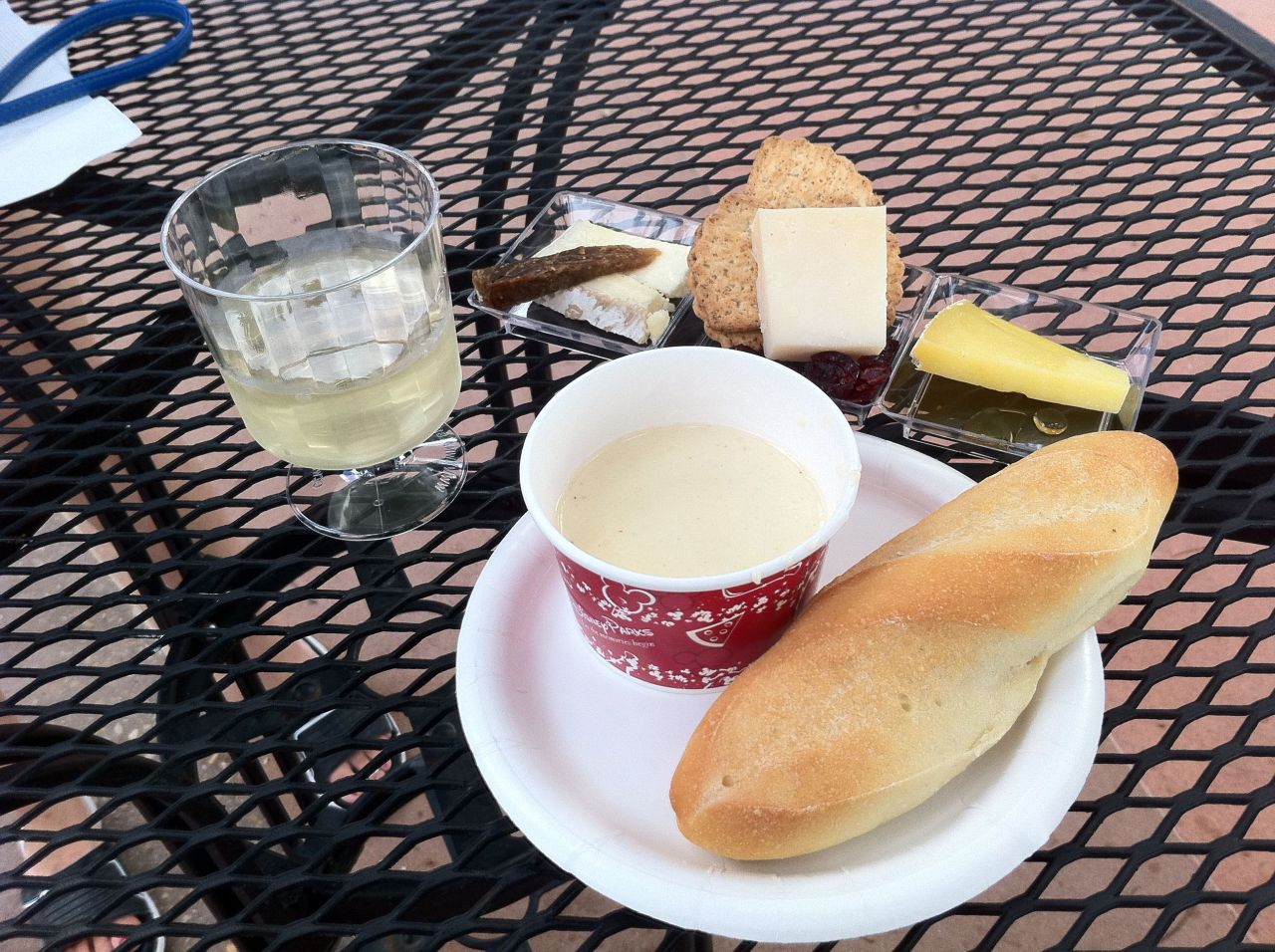 This booth was introduced at last year’s event.  I ate here last year as well, and I think the fondue was a bit better last year.  I’m not sure if I just got a bad batch, but this year it was a bit more gritty than I remember it being.  It was still tasty and light, but seemed a bit less mixed.  The cheese plate was very nice, with the additions of honey and fig accented the selection.  The resling was crisp and light… like rieslings are.  It is questionable that “Cheese” is a country, but it’s still a rather tasty booth. 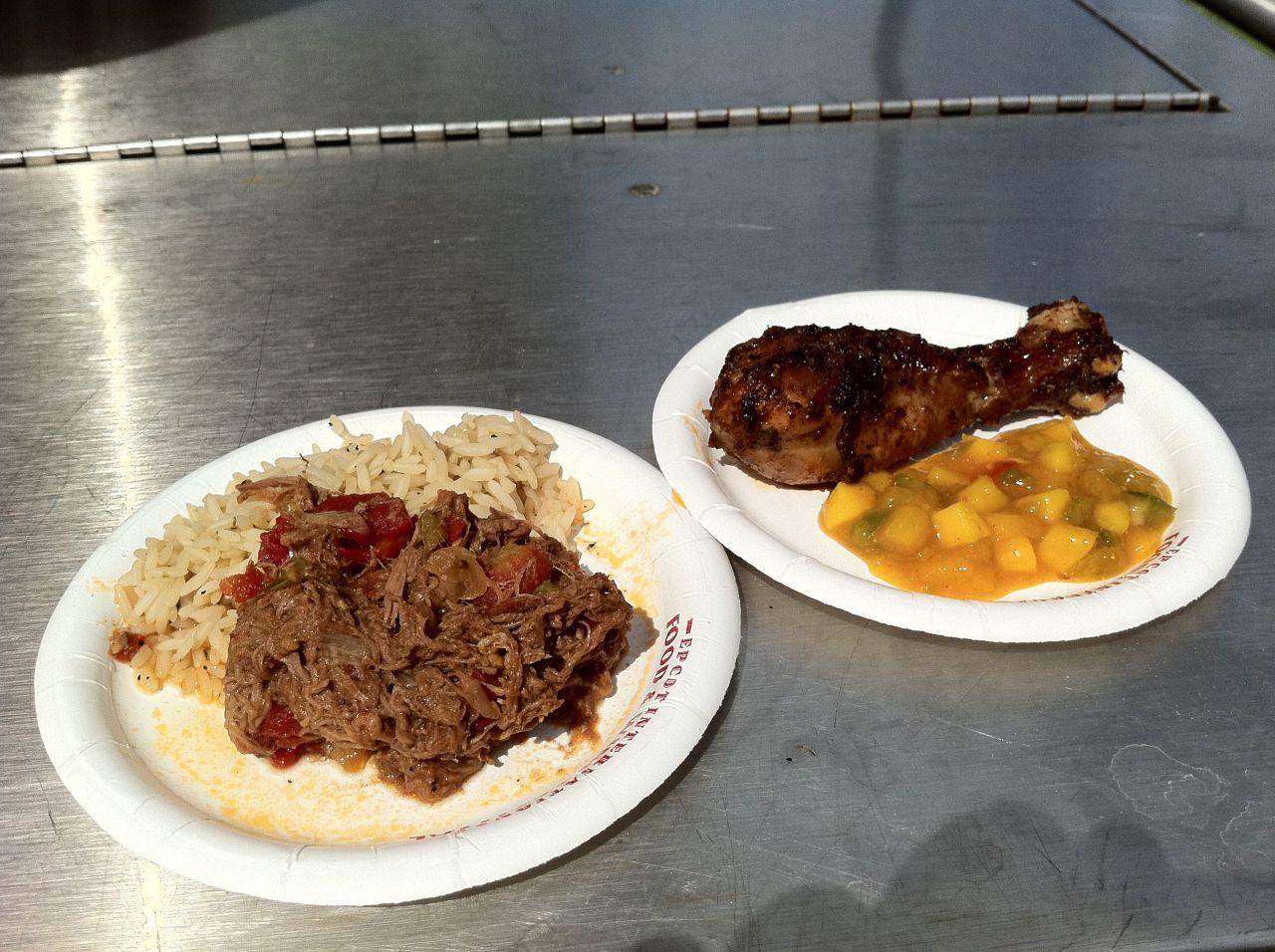 This booth was rather lack luster.  I was expecting more from the both of these items.  It wasn’t that they were bad… they were just very bland from what I’m used to: spicy jerks.  The Ropa Vieja was quite moist but nothing all that special.  The Jerk Chicken skin had a good amount of flavor, but only on the skin.  There was no flavor other than typical chicken under it.  The mango salsa was simple and sweet, but being that the chicken wasn’t all that spicy added a bit too much sweet to the dish. 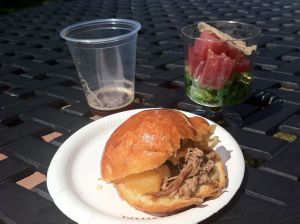 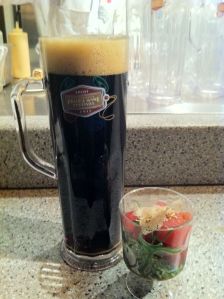 As you can see in the picture this is a booth I came back to more than once.  The Pork slider was fairly good, moist, good flavor, but was a bit small for $3.  The tuna poke was fairly good sashimi quality and the seaweed salad underneath added a nice contrast.  I didn’t really care for the lotus root chip however.  It seemed to have absorbed too much moisture from the other items.  The suprise item here was the Pipeline beer.  First I got it in the 22oz size, which in addition to getting me a tasty beer, let’s you have the festival souvenir mug.  As for the beer, it’s beer that has been brew, infused… imparted somehow with a very strong coffee flavor.  Very tasty.  And supposedly very good paired with the next item. 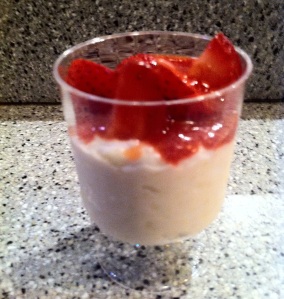 Tapioca and Rice pudding isn’t my thing, but figure I’d try it since others wanted it, and seemed wrong not to at least try a bite.  Was smooth and creamy, with a very light flavor (I’ve been told many have too much cinnamon or other over powering flavors).  The strawberries added a nice extra layer without over powering the rice pudding.  However the texture… isn’t something I can get used to.  If you like rice pudding this is great.  If not… (Also I’ve included a link to The Disney Food Blog’s review here since they’re image makes it look so much better than what we had, although do see there’s no sauce in their image.) 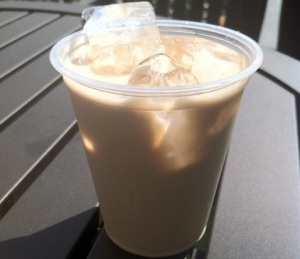 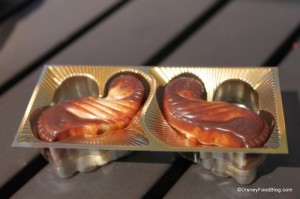 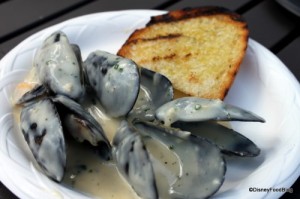 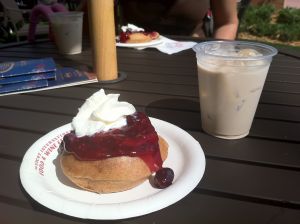 This was one of the first booths I tried.  As such I missed taking pictures of the mussels and truffels.  Luckily the Disney Food Blog didn’t, so these are their pictures.  For the coffee and waffles, well let’s say I had a couple of opportunities to take the images.  The items haven’t really changed from last year.  The mussels aren’t over cooked and have a very nice sauce that doesn’t mask the mussel.  The truffles… were very store bought.  Good, but was a bit disappointed when I saw it was a pre-packed item.  The combination of light and crispy waffle with berries and the chocolaty iced coffee is worth getting to the back of the park early each day to start off your exploration with brunch.  Every day.  Delicious.  Not too overpowering.