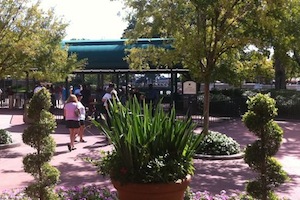 I was lucky enough this year to be staying over at the Dolphin for most of the trip.  This meant that I could enter via the International Gateway and get right to the food.  Well assuming I did so once World Showcase was open.  If you ever have a chance to stay at one of the resorts between EPCOT and Hollywood Studio for Food and Wine, I highly recommend it.

Today I’m going to share with you what I tried at the Greece, France, Poland, and South Africa Booths.  Once again, for full menu items (as well as many more pictures) check out the Disney Food Blog’s 2011 Epcot Food and Wine Festival Marketplace Booths and Menus page as I’ll only be showing and talking about the items I actually had on this trip. 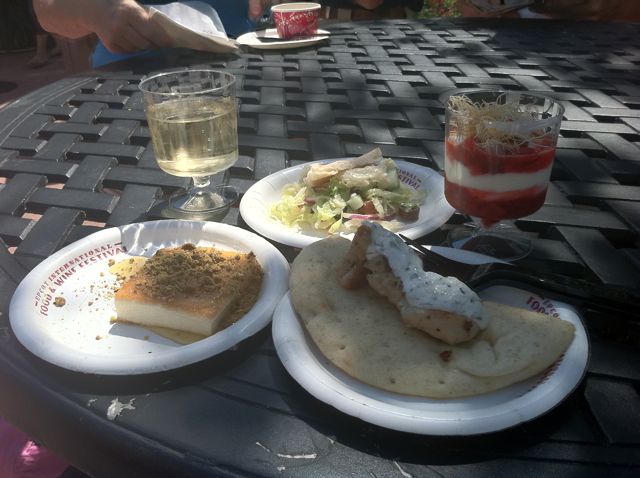 You can’t get much fresher than the food at the Greece Booth.  The greek salad is what you’d expect (olives, feta, lettuce, etc) served with a nice little pita.  Wasn’t really sure why the pita was there, the salad didn’t need it.  I was afraid the pistachios would turn me off from the grilled cheese, but they were ground pretty fine and added some contrast to the texture.  Reminded me of eating a tougher mexican blanco cheese.  Still delicious, not too heavy.  The souvlaki was moist (something a lot of “pita meat” tends to mess up) with a very fresh cucumber sauce.  The only item I felt was kinda lack luster was the greek yogurt.  However looking at the name, I should have expected something I’d get in the supermarket. Since that’s what it is.  The wine was clean and crisp.  Very mild and paired well with the other lighter flavors.  Drinking anything heavier would have killed your palate.

The Coq au Vin kinda surprised me.  I like to cook, and when I do I like making things look pleasing.  Although very lackluster in the color department, the flavors of this dish are amazing.  The chicken wasn’t too dry, the red wine sauce was very well-balanced, and the biggest surprise (because I can’t apparently read the menu) was the macaroni pasta underneath it all.  The pasta was thick but not heavy and added an almost meat and potatoes feel to the dish.  As for the drinks… I had them last year, and headed back primarily to get some more this time around.  If you’re looking to cool down on a hot day the slushy Cosmo is a wonderful blend of cranberry and alcohol, and the pomegranate Kir adds a nice palette cleanser as you work around the world. 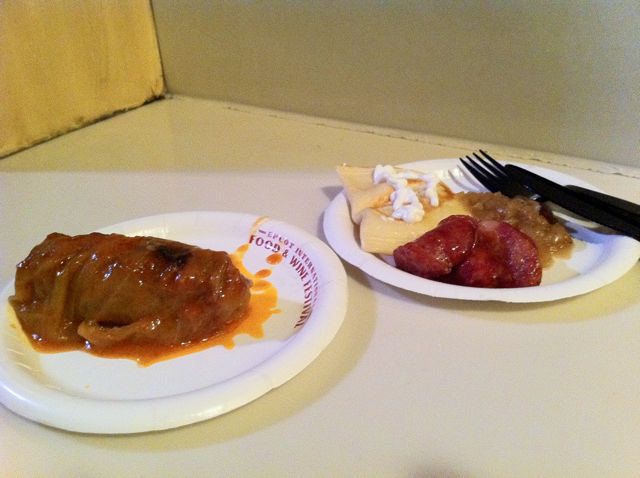 This is another one I had last year, but was so good I also came back for more. The golabki is quite good and filling for such a small object.  It was in last year’s cook book, and had trouble making the cabbage wraps (overcooked it), so I know how much of a pain it can be to make these things.  Pierogies aren’t really my thing (not a fan of creamy mashed potatoes), but the keilbassa that came with it was quite tasty. They were already cut up bite sized.

This booth is new this year, and I wasn’t sure what to expect.  I’m not a huge “creamy mashed potato” guy so the sweet potato puree, although tasty, didn’t really win me over.   The beef was a little tough, but still moist, and the braai sauce was a slightly more textured BBQ sauce (braai is BBQ/grill term in South Africa) although still worked well with the meat.  The Bunny Chow was… interesting.  The bread “bowl” was pretty normal, and the vegetable curry wasn’t all that flavorful.  Especially when eaten next to the beef. Not bad… just nothing special.  Neither dishes really caught my attention.  The Shiraz was what you’d expect from South African wines: leathery, peppery, and hearty.

4 more booths down, 7 to go.  Will finish up the booth’s tomorrow.